Movie Review - Guardians of the Galaxy 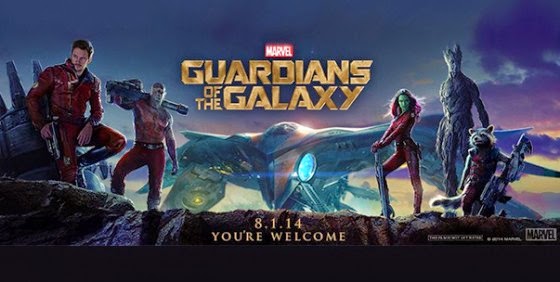 We have really slacked off on our movie and game reviews over the summer.  This has been the movie we have been looking forward to most, so I feel that I need to get off my lazy ass and write something about it. When I saw the first trailer for this movie, I knew I wanted to see it on opening night in IMAX 3D, and last night at 7:00 was that night.  The only thing that bugged me about this movie was the August 1st release date. I hated anticipating it as an end of summer release.  Not that summer is over, but it practically is at this point. Anyway, on to the movie.

It's awesome, that's all I have to say about it.  For an "origin" movie it's fantastic.  Not a lot of screwing around, it just gets in to the action and gets the crew together and we move on.  You don't have to sit through an hour of boring movie watching everyone develop, it's quick and to the point. There is a lot of great action, humor, and spaceships flying around.  Everything I need in a movie and more.  I want to see it at least one more time in the theater.  I give Guardians of the Galaxy a 10 out of 10.

I too had been anxiously anticipating the release of this movie.  After seeing the trailer about a hundred times, and the fact that every time Rocket would talk I would laugh, I knew this movie was for me.

As much as I love Chris Pratt, I really thought it was a gamble of a casting, as he really isn't huge in "Hollywood".  Let me say, if you weren't a fan before, after seeing this movie, there is no doubt in my mind you will be now.  He really is just extremely charismatic, played the dumb-hero to a tee, and provided ample comedic relief.  He was utterly perfect in my eyes (and not-so-hard on the eyes either).

Rocket (Bradley Cooper), Groot (Vin Diesel), Drax (Dave Bautista) and Gamora (Zoe Saldana) round out the major "Guardians" and all added their own touches to help make this one unforgettable origin movie.  I also have to mention the movie soundtrack.....awesome!

I laughed, I cried (of course) and actually clapped when the credits were rolling.

Be patient and sit through the credits, as there is an "after credit".  There is a Guardian of the Galaxy 2 slated for a 2017 release, and I'm not sure I can wait that long!

I will be seeing this movie several more times, and know that it will entertain me over and over.

My advice - see this movie in the theater and in IMAX if possible.